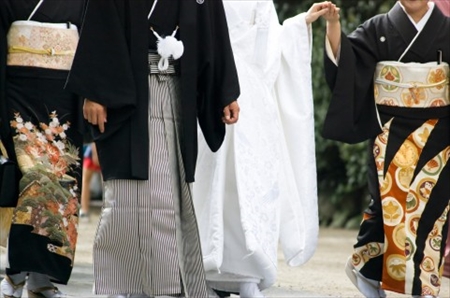 The clothing that the bride wears consists of:
- shiromuku, which is a traditional white kimono symbolizing pureness
- headgear of either one of these two types:
A, wataboushi, which looks like a white hood
It symbolizes the obedience and patience of the bride.
B, tsunokakushi, which is a rectangular piece of usually white silk cloth.
It is said to veil the bride's horns of selfishness, ego and jealousy and it
also symbolizes the bride's commitment to become an obedient and gentle wife.

The clothing that the groom wears consists of:
- montsuki, which is a type of black kimono with 1, 3, or 5 coats of arms on the shoulder, back and chest
- hakama, or kimono pants which is usually white and black striped
- haori, a thigh-lenth kimono jacket, worn to enhance the formality of the outfit

The cerenony itself consists of 7 main steps:
1) Shuubatsu - Purification rite
- The whole attendance stands up and bow to become purified symbolically
2) Norito soujou - Ritual prayer invoking the gods and reporting to the Emperor
- The kannushi (shinto priest) announces the bridal couple's marriages towards the altar of the shrine
- The whole attendance stands up and bow
3) San san kudou - Exchanging of sake
- The bride and the groom drinks sake 3 times from 3 sakazuki (shallow sake cups) increasing in size
- Note that the 3 sakazuki has to touch the lips of both the bride and the groom a total of 9 times.
- From each sakazuki sake is only sipped the first 2 times and then all the sake is drunk the third time.
- The drinking order is usually: G-B-B-G-G-B both of the couple drinking from the same cups in order.
4) Seishi soudoku - Taking the wedding vow
- The couple walks close to the altar and with an audible, large voice the groom reads the wedding oath
5) Shinrou shinpu tamagushi houten - Offering a ritual branch
The bride and groom presenting the sacred branch of a tree (typically sakaki tree)
- The couple receives a tree branch from the miko (shire maiden) and they place it on the altar of the
shrine as an offering to the gods
- Then the bridal couple first bows twice and then claps twice
- This part of the ceremony marks the safe end of the ritual
6) Yubiwa no koukan - Exchanging the rings
- First the groom gives the ring to the bride then vice versa
7) Shinzoku hai - The relatives (and friends) drink sake
As the final, closing part of the wedding celebration the whole attendance drinks sake

This last part is where masu cups can be used for the guests and family members who are attending the ceremony. As a part of the wedding celebration, it's also popular to hold a Kagami biraki ceremony.

We hope you have enjoyed this article about the traditional Japanese wedding, please contact us if you have any questions, if you are interested in holding a Japanese wedding or if you would like to buy some masu cups with the "happy wedding" kanji characters branded on it!

All the above prices are unit prices available above a given order quantity (1,30,50,100pcs)

The Masu selling company is shipping masu cups to customers both in Japan and worldwide. Recently we are getting more and more orders from not just individuals, but organizations, Japanese restaurants, international companies making a business opening ceremony Japanese style by opening a barrel of sake and drinking its contents from masu cups. An excellent way of drinking Japanese sake is to do it from a freshly made masu cup. That may be the reason why Japanese people cherish a rather intimate connection with these small wooden cups from the old times. We would like to share the best parts of traditional Japanese culture with as much people around the globe as possible.