Japanese masu. When you see these words, the first thing that may naturally come up in your mind is the "~ masu" suffix used in Japanese. Although this suffix is very nice if you use it like "Konban tomodachi to sake wo nomimasu." (I'll drink sake with my friend tonight), this is not the Japanese masu that I would like to tell you about in this article.

The one that I would like you to get familiar with is this one: 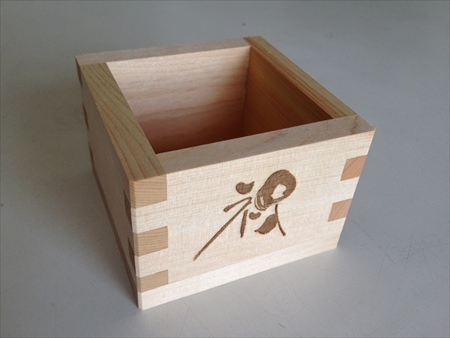 As you can see this Japanese masu is a simple wooden box, branded with the Japanese character that you may not be familiar with. The wood that it is made of is either hinoki (Japanese cypress) or sugi (Japanese cedar) and sometimes matsu (spruce). The one on the above picture is made of hinoki. The kanji character that is branded on the Japanese masu above is called "iwai" meaning celebration and/or congratulation in English.

In the times of feudal Japan sake was sold in Japanese masu which was more than a simple box, it was the standard measurement unit. The most commonly used size is the so-called Standard masuu masu that has an internal volume of 180ml. This was and still is the one that is most commoly used for drinking sake. For measuring big portions of rice, the so-called Extra-large masuu size was commonly used, which has the internal volume of 1800ml.

Now please let me say thanks for reading my article the Japanese masu way: 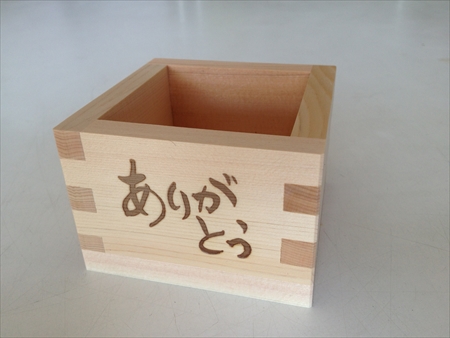 All the above prices are unit prices available above a given order quantity (1,30,50,100pcs)

The Masu selling company is shipping masu cups to customers both in Japan and worldwide. Recently we are getting more and more orders from not just individuals, but organizations, Japanese restaurants, international companies making a business opening ceremony Japanese style by opening a barrel of sake and drinking its contents from masu cups. An excellent way of drinking Japanese sake is to do it from a freshly made masu cup. That may be the reason why Japanese people cherish a rather intimate connection with these small wooden cups from the old times. We would like to share the best parts of traditional Japanese culture with as much people around the globe as possible.